For the most of Dota 2 players this just a game, and only a small part of Dota 2 community understand that this game have a deep and interesting Lore.

To be honest, for those players who play only for joy, history of Dota may be seen strange. But for true fans connection between heroes, that we can see through their phrases, every new comics from Valve – all this is like a travel deeper in the Dota 2 universe.

The beginning of the Dota 2

Dota 2 is an eternal battleground between light and darkness. The very beginning of Dota 2 starts from fight between 2 beings – leght and dark. And fore runners (almighty gods that create every living person in the world) were mad, and trap them into a sphere, that was created by Arc Warden. Prison of 2 beings now called as Mad Moon, and then this sphere get on the orbit of one of the planets. For a long time nobody heard anything about this 2 creatures that trapped in the moon. 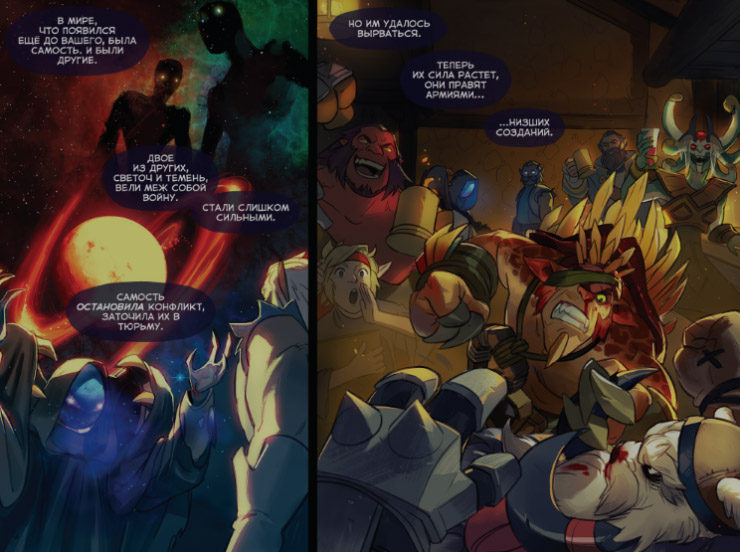 Creatures that live on the planet were pleased with the beauty of the moon, and try to research it. In one day scientists saw cracks on the moon, this was a echo of the war that still continue in the heart of the moon. Nobody can contain that rage that burst from confrontation of 2 beings, even that magic sphere. For a long times wall of this prison are thinning, and in one day it blow up. Most of the shatters was burned in the space, but a few of them landed on the planet. Ancients one were free. Planet inhabitants began to praise them like a gods and built the altairs to praise their strength. And Ancient answered on the praise with a gifts – mana, armor, energy, protection from various powers and ability to throw back even the death.

Shatters of the Mad Moon

Crystals – Shatters of the Mad Moon – powered up inhabitants of the planet, but it’s power and energy changed everything. And as their gods, heroes, people who was changed under influence of the shatters, began fight with each other. Crystal of the Light – contributed to the creation of a new life, trees bloomed around him and birds sang, it personified all light and pure, which was on the planet, the crystal of the Darkness – surrounded the destruction, the earth was burnt down, the trees die, it was the embodiment of fear and darkness. However, it was not possible to say which side was the best, because they complemented each other and could not exist separately.

The ancients gradually enslaved the inhabitants of the planet, they drawned them into their eternal struggle, and they were forced to defend the shatters and to fight among themselves. For one of the ancients to conquer and rest in peace, the other must be destroyed with the fragment that reflects his essence, and the enslaved Warriors seek to fulfill the will of their idols. From all over the world, they come to the altars of the ancient heroes who fight until the latter, without realizing that both sides are equal, as is the day and night. They do not know that their struggle will never be over, how cannot the day forever obscure the night, but continue to fight because the ancients leave them no choice.

This is the Origin of the Defend of the Ancient, and from the name we can see that all spinning around two Ancients, who enslaved whole nations. But lore of the each hero is interesting aswell, some of them lived before moon was destroyed, about many of them stories were singed, and i will tell their history in the next articles.

Read other articles about Boosting in Moba games: